Did you ever wonder who Dr. Crawford is and what led him into the Physical Therapy field?

As a child, Dr Crawford was overweight.  As he grew up he decided he would not be overweight for the rest of his life and became interested in exercise and healthy eating.  This led Jon to pursue a Bachelor of Science degree in Exercise Physiology.  As he was finishing this degree he decided he wanted to be able to take what he had learned and help other people.  That’s why he became a Physical Therapist.

Growing up Jon spent his winters in Belleville, NJ and his summers on the Jersey shore in Lavalette.  Even Sandy couldn’t change that.  The Crawford’s rebuilt their shore house and are now looking forward to many more summers together on the Jersey shore.

When Jon isn’t working he enjoys spending time with his fiance, Christina, traveling and making the most of every day.  They love to cook and are always trying new recipes and new restaurants, don’t be surprised to find them in one of the many little restaurants in Westfield.  A little know fact about Jon is that he is a bit of a “nerd.” He is a big Batman, Super Heroes and Marvel fan.

Performance Rehabilitation & Regenerative Medicine is very lucky to have Jon on our staff.  He loves what he does and works hard to instill hope in his patients and help them realize their healthy goals. 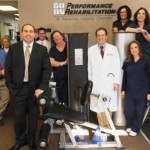 I'm the founder and Clinic Director of Performance Rehabilitation and Regenerative Medicine. I'm a New Jersey licensed and Board Certified chiropractic physician credentialed by the National Board of Chiropractic Examiners. I completed my Bachelor of Science Degree at Montclair State University in Montclair, NJ and received my Doctor of Chiropractic Degree, with honors, from New York Chiropractic College in Seneca Falls, NY.

Should I See a Doctor or Chiropractor for Back Pain?

Why You Feel Like Your Knee is Gonna Give Out

Golfer’s Elbow: What Is It? Why Do I Have It? and What Can I Do About It?

Performance Rehab Teams Up with the NFL Alumni Association